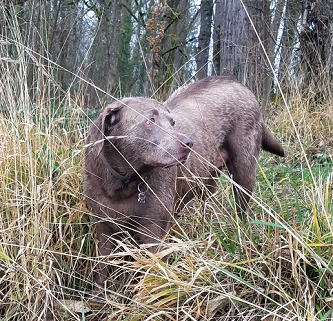 When Rat finished with us, it scuttled away under the brier whipping a naked tail in a long last lash. Cursed Year of Rat.

We crossed under the tall firs down to the river edge but saw no sign of Ox. It’s the Year of Metal Ox come along with the new moon and Lent. Ox is a slow beast like the freight engines pulling across the water heading east into the mountains across country, strong like a big yellow bulldozer. I found a small river rock painted by a child among mushrooms and lichen sprouting from a fallen log; it was a dragonfly, a totem. I put it in my pocket.

I drove Dad and Jo down to the fairgrounds after the new moon. I printed  their names and confirmation codes in big block letters on an index card and handed it out the window at intake. The volunteers guiding traffic at the 80-and-over vaccine clinic were from Lane County Search and Rescue. They waved light wands to direct us to the next open tent as if we were a plane lumbering toward our gate.

We parked to wait 15 minutes afterward to ensure neither Dad nor Jo had a reaction to the shot. Jo opened the thermos of coffee Dad brought. He packed the same bag they always use to go on day trips to the bird refuge or Irish Bend. They nearly quarreled over the coffee cups and the coffee. I offered around  diamond-shaped pieces of Revani, a coarse semolina cake I baked, soaked in blood orange syrup and topped with crushed pecans. We sipped coffee and ate the crumbly sweet while we waited.

In October, when I took Dad to his local pharmacy to get a flu shot, I choreographed the operation as carefully as a jewel heist. As we walked out, his pharmacist called out behind us “I love you.” Dad turned to me and asked me what she said.

In the Rat, I made vats and kettles and cauldrons of soup to share out, pans of spanakopita and lasagna, stews and sesame soba noddles, coconut cake, banana cake, gingerbread, and oatmeal cookies studded with bing cherries. I’m weary of my own cooking.

In March, on the day before California locked down, I asked Dad not to go to the grocery store anymore, not to go to any store, to stay away from crowds. I made him a mask from a bandana and hair bands. I buy his groceries every week as well as our own.  (Though I know he and Jo snuck out to Costco to buy a cheesecake this summer for my birthday, I didn’t say anything.)

Even after he gets his second shot, I’m still uneasy about letting him go out among many people again. I feel the thaw coming, slow like learning to walk again, yet still feel like an anxious parent rather than his child. That’s beside the fact our weekly grocery exchanges go roughly like this:

“You got two turkeys but no chicken,” Dad drops deli meat in the refrigerator drawer as I bring in more bags from the car. I push the front door shut with a toe shove.

“There wasn’t any chicken,” I hoist double-bagged sacks up onto the counter.

“No chicken,” he’s disappointed. His dogs get strips of the prepackaged deli meat on top their dinner kibble, nibbles from slices he doles out while eating his lunch.

“What’s this?” Dad rummages in a sack and pulls out a bottle of dish soap.

“There wasn’t any blue,” I set the bunch of bananas, green enough to ripen and last through the week, in the ceramic bowl next to the kitchen window.

“There’s a lot of empty shelves in the store,”

“A lot of empty shelves, in the store,”

“Do you have your ears in?” I gesture to my own ears, asking in pantomime if Dad is wearing his hearing aids.

“No, I was going to take a shower,” Dad hobbles along the counter to the nook where he keeps his wallet, keys, and hearing aids and fiddles the devices in to his ears.

“I need new batteries,” Dad returns and rustles a hand in another brown bag and pulls out a box of instant oatmeal.

“Sure it isn’t ear wax again? Are you using those Q-tips I brought you?”

“Q-tips.” I shake the box of swabs next to the prescription bottles and vitamins lined up on the shelf above the counter.

“Those hurt my ears,”

“Dad, I don’t want to go back to the audiologist already, we just had them cleaned,”

“Fine. Ok. I’ll go back to the store after we put this away,”

“I’m not going to Bi-Mart. I’m trying to stay out of the stores. That’s why I want you to think about your list every week. Make sure you have everything,”

“No Dad, you need to stay away from crowds, or why am I doing this?” I bang the cupboard door shut and, turning, stumble over Dad’s German Shorthair, Emmy, hovering at my heels. She yelps. “Dammit, Emmy, get back,” I clap my hands above her head and holler “Snap!”

“Come on, Em,” Dad shifts down to the stove and offers the dog a crust of bread from the big plateful he toasts every morning. They both avert their eyes. 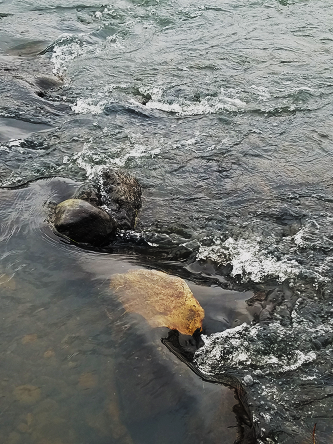