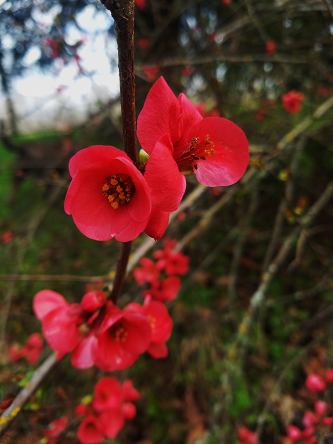 Wild quince is blooming out among the river brambles and tiny bleeding hearts tremble beneath the ferns along the animal paths.

New moon yesterday when the lights join again to trace the waxing wheel from dark seed to bright mirror and back to darkness. Mercy and I walked out to the old boat landing. She swam after sticks and dug in the sand. I pulled rusty bits of shopping cart out of the river and up onto the stones, too heavy to pack with us when we leave. The rough-built cross marking the place of ashes still stands after the winter floods.

Vic still lives across the road, though he can no longer drive and can barely hear. When Shirley died in July, he refused to move no matter how the family implored and reasoned. A friend takes him out for exercise and errands several times a week. He orders groceries online, tins of sardines and rice pudding. I labeled his house key and put it in the little wooden bowl on the table with the other odd bits.

Sometimes I glimpse Shirley, out in her robe and slippers, watering the planters or checking the mailbox. We would stand in her driveway and talk and laugh. Mercy, bored with it all, would lie down and wait in the shade.

A year ago there was a snow storm in the valley that dropped almost two feet over two nights. When I opened the blinds the first morning, the dogwood tree was bent to the window glass. I went out with a broom and rocked the branches to dump the powder, much of it down my arms and neck, but the bent dogwood did not break. It bloomed in May.

Repost of Born for This the first breath after:

Vic is shoveling snow off his driveway with a flat half-spade. There are soft trailing footprints where Mercy and I climbed the slope to deliver white bean and chicken soup and take away a bag of trash to the street. We put the bins out for collection Sunday night as snow started to fall and stick. I knocked a foot of snow off the bins with the snow shovel, twice. The snow on the hill is up to Mercy’s belly and my knees. I’m keeping an eye on Vic through the front windows as I write. Vic is 89. He doesn’t want any help.

Vic’s red plaid Pendleton is tucked into khakis hitched up to his lower ribs. When the sun came out after the latest flurries, he leaned against the garage and unzipped his coat. He slices at the top of the snow with the spade and lets it slip off to the growing pile on the side. Looking south to the Butte, he stops and rests, bowed with both gloved hands on the handle of the shovel. Twice I nearly pulled my boots back on to go out to help and then stopped. He refused my help twice already.

Monday morning there was a foot of snow. Mercy was out back barking before daylight, baying at snow drifts. My phone starting pinging with incoming text messages. The power went out at ten o’clock, yet I had enough presence of mind to brew extra coffee and fill every thermos from the top cupboard with hot water before it went. We lit a fire and set up the camp stove under a sheltered eave. I pulled on my gear and took the dog out back to dig the gate free while she capered and plowed through the powder.

Small trees, herbs and shrubs, my beloved curling hazel, all snapped and broke under the weight of the first fall. Fallen cedar limbs yawn like leviathan bones jutting from the snow. A 30-foot scotch pine toppled in the back and took out a section of fence. Fir trees cracked in the middle distance. An electrical transformer flashed and exploded farther away. Another ten inches of snow fell. Shy yearlings lurk down the hill behind tree trunks watching the dog tunnel in the snow. Deer mice crept in during the night to scoop frozen drippings from a corner of the grill pan.

The main roads are plowed now. The power is back. The sun was out briefly before it freezes tonight. Our hillside spur road needs to melt more to drive down; even in the Outback there is not enough clearance to negotiate the grade. Shirley was referred to an oncologist and has her first appointment tomorrow morning. She thought she’d try to walk down the hill to meet her son where the roads are cleared. I shook my head and suggested alternatives. Shirley is 81.

The patient advocate at the cancer clinic is sending transportation for the appointment, a chained high-profile vehicle with a chance of climbing.

Shirley doesn’t think Vic will be able to travel with her, although he desperately wants to go.

Kim K. McCrea earned her BA in English before embarking on a career in technology and public service. Kim won Oregon Writers Colony 2018 essay award, Treefort’s 2017 Wild West Writing Prize, and was named runner-up in Cutbank #88 short prose contest. Her creative nonfiction is featured in Cutbank, Tishman Review, Cagibi, and Watershed Review. A native of the Pacific Northwest, Kim lives in Oregon, where she studies the moon and stars and wanders with her Labrador in the rain. Unless otherwise credited, all photographs and images on this site are the original work of the author who retains all rights to their use . View all posts by Kim K. McCrea

8 thoughts on “First Breath After”