“She treads on the tail of a tiger

and is not bitten;

Rain seeps down and cradles the plum blossoms before dropping into the brambles. Out on the hill the wild turkeys gather. There are many hens and a few formidable males strutting after. Their tails are fanned and their chest feathers ruffed, making a show of light playing off the metallic sheen of copper and graphite quills flashing gold.

I find feathers in the grass; the best of them stand in a jar outside the backdoor like a bouquet. They are said to be a sign of prosperity and abundance. Mercy stands at the window and growls and frets at the mating display. Though I might let her out to scatter the birds when there are fewer, not now, not when the heat is on them.

I hear the big birds down in the woods when the dog and I walk out and remain watchful until we pass. The turkeys call to each other in high peeping chirps to gather and form a flock, a small unexpected whine from such large bodies.

They can fly, and do, when the dog charges them out on the grass verge, 100 yards into the fir trees. I’m careful, because she would kill one if she caught it, or worse, didn’t kill it and had to fight raptor claws. I don’t want to kill a turkey as much as the dog wants blood and we hold that equilibrium. When we show ourselves, the birds grow nervous, leave off their pecking and edge toward the woods. It’s best now, before poulting, because they don’t remember from season to season.

One spring turkeys adopted our elderly neighbor’s deck as their territory. Vic and Shirley were unable to go out to the garden without being mobbed by twenty-pound birds. I bought them a slingshot and showed them how to shoot dried chickpeas from the doorway. Mercy and I patrol the fence line.

I carry a long strong lead in a heavy case bought online from Gun Dog Supply, the only one I’ve found she hasn’t snapped. Yet. She’s broken steel cables and pulled posts from porches where cables were anchored. I don’t need to lift weights. I fly a hundred-pound dog.

I submitted a piece to a literary journal this morning, the first after many months turned away. How long to polish the shield before the reflection of the gorgon is clear enough to strike? Dither here, in this public scrapbook, posting markers and milestones so I might remember.

Rain seeps down and bows the buttery cones of the first daffodils along the river. Geese pass high and cry as they circle, pairs come in low to land along the canal by the footbridge. Herons fish alone and nest together, awkward above their nests in high branches of one tree. The dog swims after sticks and watches the geese land beyond her reach.

Under the cedars, sheltered from the rain, there is a rough-hewn totem most probably intended to represent Squirrel. Mercy wants to take it up and shake it, but I offer her a fallen branch instead. It doesn’t look much like a squirrel to me, but I’m distracted.

I think the Year of the Rat arrived. 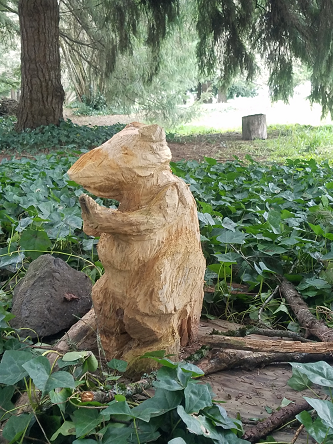 Kim K. McCrea earned her BA in English before embarking on a career in technology and public service. Kim won Oregon Writers Colony 2018 essay award, Treefort’s 2017 Wild West Writing Prize, and was named runner-up in Cutbank #88 short prose contest. Her creative nonfiction is featured in Cutbank, Tishman Review, Cagibi, and Watershed Review. A native of the Pacific Northwest, Kim lives in Oregon, where she studies the moon and stars and wanders with her Labrador in the rain. Unless otherwise credited, all photographs and images on this site are the original work of the author who retains all rights to their use . View all posts by Kim K. McCrea