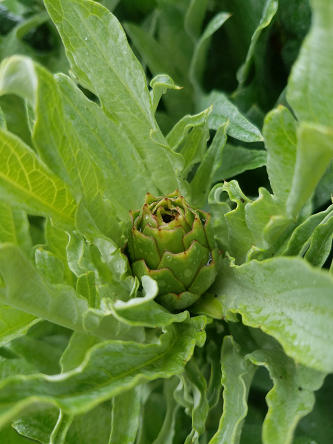 “It doesn’t matter what you do, so long as you change something from the way it was before you touched it into something that’s like you after you take your hands away. The difference between the man who just cuts lawns and a real gardener is in the touching. The lawn-cutter might just as well not have been there at all; the gardener will be there a lifetime.”

“It doesn’t matter what you do, it matters that you do,”

–Me, to my teenage son

Walking out on the hill in the rain this morning  into that sweet earthly scent of rain on dry grass–petrichor, the blood of the old gods falling on stone–to shrug off the hood and let the drops burnish my hair.

Since the deluge in April, there was little rain, not the soaking female rain of spring that trickles to the root. Days have been warm and mornings spent carrying water in cans and hoses, swearing at sprinkler heads with stripped threads and leaking faucets forgotten in October, sprinkling, spraying, misting, playing the rainbow in the arc of falling water.

Zucchini seeds burst above ground yesterday, waiting until I was distracted, between morning watering and evening’s final tour. There are globes forming on the artichokes that are still small as thimbles. I let the thistledown bloom lavender blue and invite the bees to a buffet. The plums are red and hard as olives.

I gleaned wild asparagus with Grandma from the banks of irrigation ditches and pastures when I was a child, keeping a wary eye out for a bull or vexed mule. No two spears were the same shape, size, or color, as they are cultivated now. Some were thick and squat and purple; others willowy and pale green, with an occasional natural albino, a bouquet of spring phalli jutting from earth into the light.

Local asparagus is coming in season and to market, tender and firm (however disappointing in uniformity.) I buy a braces of it, while it lasts, to saute simply in a splash of stock and butter, a drop of white wine, and a drizzle of maple syrup, simmering off the liquid and shaking the pan to finish with a blister. The cure is always growing nearby.