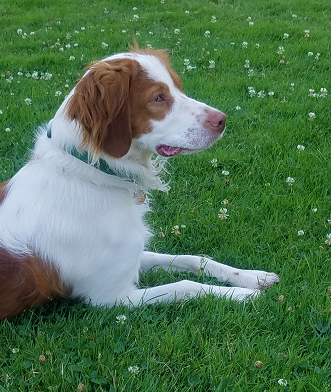 Always dogs. His name is Ben. He’s a Brittany Spaniel, one-year old. My father adopted him, but he was a hurricane.

He’s not my dog. Sometimes I take him down to the park. The city waters the grass early in the morning enough to seep down past the roots. It’s still dewy and soft along the field when we walk through and circle for another pass. I coach him to follow, to sit when I stop, to come when I call. It’s so hot, August hot, that he stretches out in the clover to cool off when we pass under the shade of the walnut tree.

He’s not my dog. Sometimes I take him out to let him see ducks floating along the canal. He wades in and practices his dog paddle. Two canoes come upon us, in the shade of the lower canal, and he swims out to investigate. The women offer him tennis balls that were floating by, but he’s only interested in the canoes and the paddles. I thank them and slip the wet balls into the game pocket of my vest for later. There is pheasant scent and squirrel, vole and snake, much to be studied on for a young dog. Fall is coming.

Kim K. McCrea attended the University of Oregon’s Clark Honors College, graduating with a BA degree in English. She embarked on a long career in technology and public service before returning to letters. Kim won Oregon Writers Colony 2018 essay competition, Treefort’s 2017 Wild West Writing Prize, and was named runner-up in Cutbank #88 short prose contest. Recent work appears in Cutbank, Tishman Review, Cagibi, and Watershed Review. A native of the Pacific Northwest, Kim lives in Oregon, where she wrangles her Labrador in the rain. Unless otherwise credited, all photographs and images on this site are the original work of the author who retains all rights to their use . View all posts by Kim K. McCrea

One thought on “Dog Days”