August is an adjective, as well as a noun.

Birch leaves turn gold and drop, skittering and rattling across the road; the first leaves to green in the spring, the first to let go. The trees clatter. The blackberries are early this year. In the evenings, a doe leads her twin spotted fawns to the berm across the road to feed on the ripe berries. 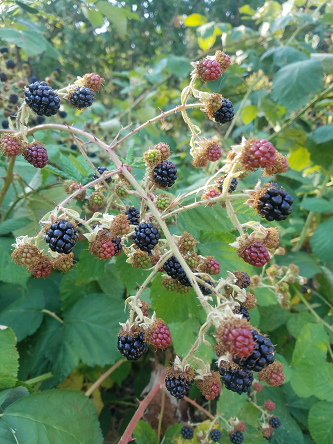 In the full height and completion of summer, we arrive at the cross-quarter, here between the promise of the summer solstice and the inevitable falling away at the equinox. It’s in my bones, this season, the time of ripeness and venom. My mother broke a tooth chewing ice the night I was born.

When I walk out on the hill with the dog, hat brim low over my eyes against the morning sun, the ground is cracked and sparse with weeds. The grass withered and died. Wasps skim over the sereness. I watch my feet. Yellow jackets hover at the hose nozzle. They are early this year, angry.

I set up the trap on the top deck where they menace and hunt. It’s a simple jar filled with water and a drop of soap. The jar is intersected by a funnel fixed with bit of chicken for bait. The wasps are drawn in by the scent, but cannot find their way out again. They drown, their own nature betraying them, like most clever traps.

Kim K. McCrea worked as a System Analyst for 25 years building out the internet of things before returning to letters in 2017. Kim won Oregon Writers Colony 2018 essay competition, Treefort Wild West Writing Prize, and was awarded runner-up in Cutbank short prose contest; her work was short-listed for Proximity Magazine's Essay Prize and the Barry Lopez Creative Nonfiction Contest. Prose appears in Cutbank, Tishman Review, Cagibi, and Watershed Review. Kim lives in Eugene, Oregon, where she wrangles her Labrador in the rain. Unless otherwise credited, all photographs and images on this site are the original work of the author who retains all rights to their use . View all posts by Kim K. McCrea