The month is named for the Roman two-faced god Janus who looks back while looking forward. At the turning of a New Year’s Day, some recount the disappointments and triumphs of the year now past before turning to declare resolutions for the new year to come. Janus is a two-faced god overlooking the port before embarking, where past is present as prolog and the future ahead is still merely a damask curtain rising before an unknown scene.

It rained yesterday; I call it rain in all sincerity and respect, some two inches of water to wash away the pockmarked snow and the grit from the sanded streets. January is the realm of Capricorn, another creature of duality with the tail of a fish and the body of a goat. Capricorn climbs out from the depths of the stormy sea up the stony mountain. The remnants of the holiday cakes are crumbled on the hill for the crows to feast.

When my black leather jacket was stolen in Portland, I was bereft and enraged. I saved money for a new one, a better one. I tried on different styles for size and finally ordered a moto-style jacket with tough brass zippers from the kink shop on SE Belmont. When the jacket arrived, the owner called me to come pick it up. He asked me out to dinner, but I was entangled. “You can’t get enough of what you don’t want,” he told me. I think about what he said when asked what resolutions I’ve made for the New Year.

I still have the jacket. 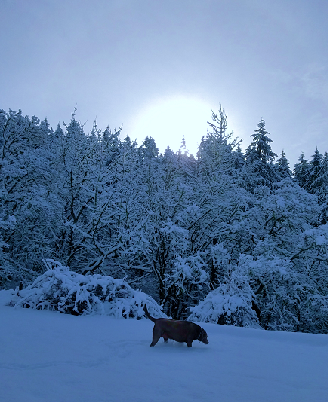 Eight inches of snow fell Christmas night, a few more inches accumulated the next day. The world fell silent for a time.

The oil-filled electric heater in my little studio needs time to warm and fill the space. I wear fingerless gloves like Bob Cratchit where he labored at Scrooge’s ledgers with scant coal on the fire. I don’t shut the door, just prop it ajar with a winged bronze pig as a door stop so the dog can see me sitting in the corner. She doesn’t like to come in; she waits outside lying on a flokoti rug in the next room with a vantage of all approaches.

Snow still fell while I shoveled on Boxing Day and Mercy circled the hill casting for the missing quail and squirrels—snow in big tattered flakes like ripped muslin, not the crystaline shapes cut from folded Christmas paper. The shoveled path from house to road and then down it filled in again and again with fresh heavy snow, but it’s wiser to shovel two inches six times than twelve inches once.

I offer Ethan $20 to help dig a track down the hill to the crossroad. He is thirteen now, born in the house next door. He doesn’t understand why we are shoveling when more snow is forecast. I point up at the sun rising above the fir trees and tell him the day will help melt new snow from the bare pavement. He wears a lion’s head hat as he shovels. I give him a $5 tip.

The old year is as shaggy and soiled as the melting snow.

Last year an eclipse bloodied the full moon in her home sign. It was after solstice, after the holidays, the demarcation of the before-time.

Under this year’s full moon, a wasp queen woke from her secret winter nest inside an oak haunch stacked for the fire. She circled madly through the kitchen hammering the light above the stove.  While I chopped vegetables for soup, her gryring shadow fell across my knife magnified into a furious gryphon on the wing. She was finally trapped and set free into the December night.

A flood of narratives are on offer everywhere reflecting on the old year gone, but I do not read them. It is air now, not stone. Watch the blade and not the shadow.

Down along the river the sky and water blend together at the horizon, smelted iron without inflection, my boots sinking down in the saturated loam. The dog reads the shades of scent in the air and tells me their story. She presses her nose to the long grass, following, to raise a pheasant. When the fireworks started, she slipped under the bed.

I cut my hair on New Year’s Day. Six inches of hair grow in a year. I picked out the moss and twigs and mud with a wide-toothed comb and sliced away old handfuls with sharp steel shears.