I worked on the 14th floor of the bank tower in downtown Portland. As part of June’s Rose Festival celebration, upriver bridges lifted for ships to pass through to dock downtown. Crowds gathered to greet sailors at the docks, to stand in line for tours along the towering decks. No one returned to witness the cranking castoff and engine reverse at the end of the pageant, when the ships turned their steel bows back out to sea and rose petals blew black on the sidewalk. I watched from the tower window.

I rode the Burnside bus. My stop came at the foot of a pocket park between the bank tower and Mary’s Strip Club. There are upright canines plying downtown streets, the jackal-men, the wolves, coyotes, and hounds. One December morning, I stepped off the bus behind two men. One pulled a package of raw chicken from the waistband of his pants, meat stolen a dozen blocks up Burnside from the Safeway store where they boarded. As I crossed the park, one tore the plastic wrap away, crouched down and ripped at the dimpled fat with yellow teeth, vapor from their co-mingled breath wreathing as they huffed at flesh and disappeared in fog.

Sometimes I took the elevator down to the street to smoke, coat-less in the cold. I wore cobbled black pumps like retreaded tires and shivered in a faux-silk polyester blouse. When she saw me braced against the wind on the sidewalk, Audrey turned her loopy-wheeled shopping cart up 5th to ask for a cigarette. Her left eye was lazy and drifted to doze as we talked. She traveled with an old Yorkie bedded down on the black plastic bags stacked in her cart. When I gave her a cigarette, Audrey tucked it behind her ear and drew down her navy surplus cap. She didn’t smoke, she said, she needed to trade it for something to feed the dog.

I walked the pedestrian alleyways and sidewalks downtown. Coyotes crouched on flattened cardboard drumming stubble cheeks with stained fingernails. I worked my way across city blocks diagonally, crossing streets as traffic ebbed and stalled, skirting construction pits, smoke-eyed poodles with pink hair and script tattoos, wolves with red silk ties wheeling Humvees into valet parking. I moved to another city and took another job in another downtown, another one skimming the concrete fringe, searching out my own reflection in plate glass windows.

In the freezing fog of November, the camp in the oaks collapsed to a heap of canvas and nylon, a single shoe, broken glass. We walk up river, skirting crushed plastic bottles and clothing shreds the dog takes into her teeth and thrashes, if I let her. This one is a pirate seeking booty. I scout the ground as we walk, scanning for the glint of needles or orange syringe caps.

We pick our way down the bank, over black rocks, to the river. Great Blue Heron fish alone, still as snag, feathers blending with the timbre of the current. Sheltered by reeds and overhung alder, I startle a bird from her reverie beside an eddy. The heron cries out before launching aloft over the river. Chastened, I counsel the dog as we watch her flight dissolve in the mist.

The scent of water and wet dog settles over me, walking out singular, but not alone, into the open places, another vagrant, another mutt looking for home. There may be meaning in daring a place among this enigmatic array of earthly things, though it eludes me still.

I whistle for the dog and walk out, listening. These secrets are beside the river, if they are anywhere. There are fierce shy birds hidden there along the bank, birds the color of water. 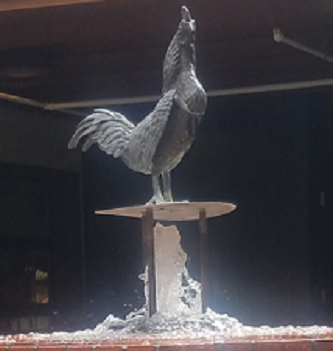 Yesterday I went downtown. I checked my hair for leaves and twigs and changed out of dog clothes.

Pam and I meet up at the Thai place where I order red curry, extra spicy, with eggplant and tofu. Pam still works on the 4th floor and shares her play-by-play intrigue at the office, a one-page sheet outlining goals of the next reorganization, current buzz words like “inclusive” and “creative,” a forecast of a brilliant and final restructure ensuring everlasting productivity and prosperity. Whatever. I make my predictions and give Pam her birthday present. Our server’s name is Eternity.

A quarter block from the restaurant, in an alley behind the video arcade bar, a homeless woman’s skull was crushed when a garbage truck ran over her while she slept early one morning last month. There is no city hall here. It was torn down and paved into a parking lot. New structures fill the pits that yawned so long from the demolished Woolworth and Sears buildings, empty so long that groves sprung from the cracked concrete at the bottom. It’s still the same downtown I left three years ago.

Six months ago, I resigned from a job working in a shabby cubicle with a stunning view to the east. I rarely turned around from my dual monitors to look out the window, not unless there was a rainbow or a police take-down at the transit station.  Even then, I only turned because other staff rushed in to lean against the credenza, chattering and pointing and leaving fingerprints on the glass. I spent too many years in different cubes, in hindsight all remarkably the same. I write at home now. I spend long moments lost, gazing out windows.