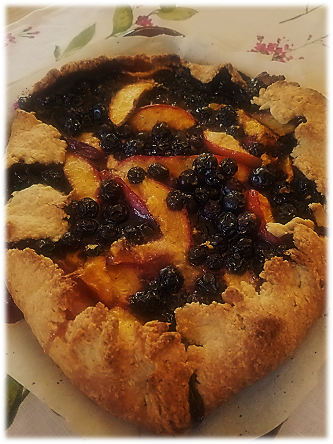 The wild blackberries are ripening early, blistering under this relentless western drought, three weeks before their custom at cross-quarter.  In another day or two, the plums will be ripe enough. I’ll pick some low-hanging fruit for a jar of jam before the deer take them all, or they wither on the branch and fall. With the third cutting of rhubarb, I loped off the parasol leaves and washed the thick pink stalks under the hose.

There is no rain in the forecast. The dog is dumbfounded. Last week there was sparse early-morning dew with a phantom scent of rain, little else. We walk early and then I water the garden.

I made a galette, a rough shaggy pastry of almond meal, a stone so-called in the old French. The blueberries went in, the two nectarines I bought that ripened too fast on the counter, a shake of nutmeg and sherry. I dreamed about rain. I dreamed of abalone and mother-of-pearl.