I remembered most of the Prologue from The Canterbury Tales. (Because it is April after all, and the Sun is nearly halfway run in Aries, and somehow, suddenly, we are living in a prologue to something else– pilgrimage perhaps.)

I recited the lines to Mercy while puttering in the greenhouse. She stuck her head through the trap door to listen. Many years ago my cohort memorized the twenty or so lines; each of us in turn reciting them in Middle English to Professor Greenfield. This was to prove our understanding of English pronunciation  prior to the Great Vowel Shift before continuing on to read the Tales themselves.

Mercy was not impressed. She turned around to chase a deer mouse and very nearly caught it. 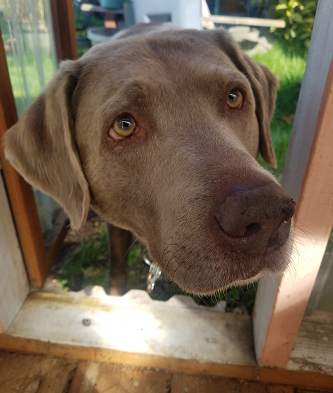 *Here bygynneth the Book of the tales of Caunterbury

Whan that Aprille with his shoures soote,
The droghte of March hath perced to the roote,
And bathed every veyne in swich licóur
Of which vertú engendred is the flour;
Whan Zephirus eek with his swete breeth
Inspired hath in every holt and heeth
The tendre croppes, and the yonge sonne
Hath in the Ram his halfe cours y-ronne,
And smale foweles maken melodye,
That slepen al the nyght with open ye,
So priketh hem Natúre in hir corages,
Thanne longen folk to goon on pilgrimages,
And palmeres for to seken straunge strondes,
To ferne halwes, kowthe in sondry londes;
And specially, from every shires ende
Of Engelond, to Caunterbury they wende,
The hooly blisful martir for to seke,
That hem hath holpen whan that they were seeke.
*Text courtesy of Poetry Foundation

Kim K. McCrea worked as a System Analyst for 25 years building out the internet of things before returning to letters in 2017. Kim won Oregon Writers Colony 2018 essay competition, Treefort Wild West Writing Prize, and was awarded runner-up in Cutbank short prose contest; her work was short-listed for Proximity Magazine's Essay Prize and the Barry Lopez Creative Nonfiction Contest. Prose appears in Cutbank, Tishman Review, Cagibi, and Watershed Review. Kim lives in Eugene, Oregon, where she wrangles her Labrador in the rain. Unless otherwise credited, all photographs and images on this site are the original work of the author who retains all rights to their use . View all posts by Kim K. McCrea