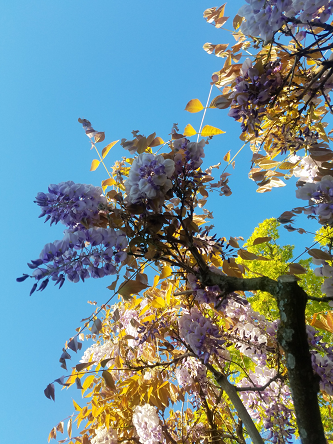 Wisteria blooms in full-falling clusters from a weathered arbor out front. Bees and hummingbirds leave off the fading rosemary to suck nectar from the blooms.

Peas are up, shallots and radish sprouting. Downhill streets are quieter, though more people walk up the hill now. They climb the road and then stand unsure why they came this way. They take in the panorama and then turn to trudge down again.

Mercy barked at one recent tourist approaching the grass verge while I planted red onion seed, doing her job as sentry, scaring some startled man back down the hill before I could round the bamboo and compost pile to see what excitement was upon us. The dog wags and smiles at strangers, but never lets them touch her. We’re all grounded now, it’s time-out.

Mom grounded me for two weeks in high school. Although my school had an open campus policy, Madame was a neighbor. Madame felt she must report I missed three French classes during spring term of junior year, a pity (quel dommage!) as she painted pictures of great potential if I would only learn to apply myself. French class fell during fourth period, immediately following a free third period when my friends and I would slink out to the baseball dugout and smoke a blunt. I always brought along my textbook and studied the three verbs du jour, but sometimes wandered off with the crew afterwards to find something for lunch. Grounded.

That was all long before Zoom and Facetime, but still the same simply doing time. Friends came by on Friday night and tapped at my bedroom window, but on Saturday night I pretended to be sleeping. I never missed French class again and probably never truly learned to apply myself.

Down at the river yesterday I gathered flat skipper river rocks and filled the back game pockets of my vest with them until both pockets sagged and I doubted my balance. I didn’t want to trip on a tree root into the current and do a Virginia Woolf without any intention and definitely without leaving a note.

“What is the meaning of life? That was all–a simple question; one that tended to close in on one with years, the great revelation had never come. The great revelation perhaps never did come. Instead, there were little daily miracles, illuminations, matches struck unexpectedly in the dark; here was one.”

― Virginia Woolf, To the Lighthouse