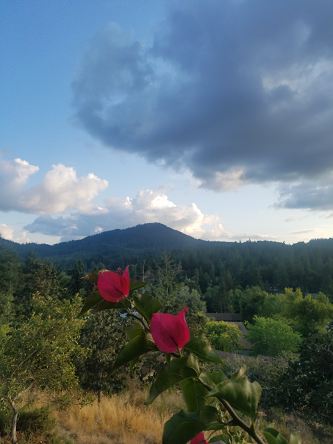 For August, a checklist:

Buy roses, an odd number as the French do, rather than an American dozen–white roses, with a blush, to suit the bleached afternoon sky and the crumbs on the tablecloth. Cut the stems severely short. Wipe the small cobalt vase to place on the center of the dining table. Fill the blue bowl with water each morning and sigh.

Water the monster red geranium, the one that survived another winter, the one that spilled out and overwhelmed its large ceramic pot littering blood-red petals that smear underfoot into jammy stains.

Take Mercy to the river to swim and muck about in the weeds and willows. Bring home a flat smooth river rock that fits when I close my fist around it.

Check the Orthodox calendar to confirm the feast day of the Dormition of the Theotokos is August 15th. I am not Orthodox, but the stores close in Athens and it would be difficult to find a taxi if I was in Greece.

Count the cantaloupes swelling on the vine. There is only one. I tickled the yellow-starred blossoms with a twig because I didn’t trust the bees. They seemed distracted. It’s too late.

Move the hanging fuchsia to the backyard; deer crept up on the front porch early one morning and ate two-thirds of it. The dog warned me, but I stayed in bed. Check whether the gladiolas were devoured as well.

Resist reading any news, avoid all media sites, including Reddit. Pace the length of the upstairs deck, turn, pace again as though the house plunged in open water and call “Avast,” to the pots lining the forecastle, exhorting the geraniums and bay laurel to hold fast.

Bundle up the wool Flokati rugs and lug them down to the local laundromat next door to the cannabis dispensary. (Laundromats are damp and dismal places even with all the hopeful scents of detergent and fabric softener.)  Load a bag of quarters in three industrial-size machines, cold water only, and work the crossword puzzle in the free weekly newspaper while the machines spin. Lug the wet wool home again and flatten the rugs to dry in the sun for several days, turning as needed.

Let the young repair men inside to replace the tattered canvas of the awning. Though I tugged the monster geranium and its fellow potted flowers out of the way, the trailing petunia managed to be crushed underfoot.

Avoid the headlines. Return to the root.

Walk Ben to the park and loop down Walnut Lane on our return to see the enormous house under construction. Let the workers pet Ben, but avoid the nice woman with the yellow Lab, because Ben is still sketchy sometimes. Throw sticks for Mercy on the hill and let her greet the landscapers who arrive every Wednesday to mow and tend the neighbor’s yard.

Pick zucchini. Pick sun-gold cherry tomatoes. Pick pea pods. Pick cucumbers. Squeeze a grape, not yet. Wash my hair and comb through the spiral curls with my fingers before they completely dread.

Grate zucchini, salt it and and wait for the shreaded squash to sweat in the colander. Squeeze the water out and stir into muffin batter with the last of the blueberries. Freeze a few.

Strain the red currents that soaked in apple cider vinegar for a week and blend the juice with thyme-infused simple syrup. Bottle the fruit shrub and tuck it away, satisfied with sampling the overfill.

Think of washing the front windows, but sit on the edge of the front porch dangling my feet and roll tiny white blooms of summer savory between my fingers instead.

Most things hang by a thread.