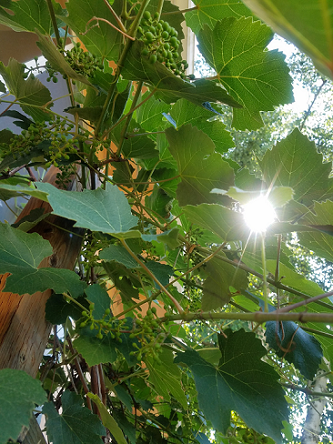 Grape clusters dangle and swell under leaves fanning larger than my hand. Grape tendrils test their boundaries every morning, fondling the neighboring cucumber’s trellis all-so-wistful before seizing the iron frame to claim it again.

The first cucumber is cut for slicing and the grapes nudged back into the confines of their arbor. Green and red grape vines share one rack and reach to the window on the second floor. I cut grape leaves to line the bottom of a platter yet linger awhile inside the arbor. There is shelter. Here is mystery, inside the breathing green sprung from dried roots.

A succession of caretakers and nurses arrive and leave now in a nearly-familiar rotation. They park out on the dead-end road and walk up the neighbor’s driveway to the front door and disappear inside. Shirley is no longer waving from the hospital bed propped up by the picture window when Mercy and I walk home up the hill. I search the glass, squinting under the brim of my hat, but it’s blank.

I dried a long wand of catnip cut before the herb came to bloom, bundled stalks of pungent mint to soothe the squabbling neighborhood cats quarreling among themselves and tormenting the dog when they sashay along the front deck. (It’s usually the same sashaying cat: the lunatic tabby that once charged and tried to take down a grown turkey.)

I took the wand out into the road the other night before dark and called to the cats, whipping the tip in the air and scraping the pavement to entice them. The tabby bounded along parallel with me, keeping a wary eye out for the dog, pacing down the hill. I laid the catnip wand down on the grass for a midsummer revel and went home to cook dinner.

Shoot grows to bud, flower comes to fruit, seeds weave their secrets to unfold in another season. The solstice passes when the sun ebbs south again after hanging stopped in the sky. Eclipses are coming with the next moon.

Rain came to wash away the gold dusted pollen and cottonwood fluff.  Thunder and wind heralded the change of season. Today clouds graze and chew the blue. 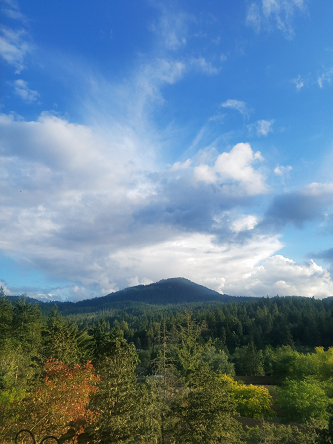 10 thoughts on “In the Grape Arbor”