The kitchen is buttery with pine nuts, pignolia, seeds shaken from pine cone. As they toasted I stooped to watch through the little oven window, yet finally judged them brown from scent rather than sight. These are not the longer oval nuts from the Mediterranean which are even more expensive and difficult to find. These are round and squat, from Asia. They will do. I mostly use pecans now, except for this.

Last night the neighbors celebrated Passover Sedar with the children playing on the hill and out in the street before sunset. Today is Easter.

Orthodox Easter, Pascha, is another week away, as the date must fall after Passover. Easter eggs are dyed blood-red in Greece with dye derived from onion skins. People play a game knocking eggs together, as they knock they say “Christos Anesti,” and the response comes “Alithos Anesti.” The person with the last uncracked egg receives blessings and luck for the coming year.

The pine nuts cool on the counter. I bloom the Greek oregano and thyme in olive oil for a minute before adding the chopped onion to the pan. Mom didn’t make spanakopita, though Toula did. She’d bring over a basket of the pastries filled with spinach and feta on holidays. Mom made baklava and kreatopita, tucking the filo sleeve under a damp dishtowel as she brushed the leaves and stacked them, pushing the hair back from her forehead with a wrist. I julienne a gallon of spinach leaves and two handfuls of parsley to wilt with the onion and temper the greens with nutmeg.

Eostre was an Anglo-Saxon goddess of fertility. Once she healed a wounded bird by changing it into a hare. The grateful rabbit brought her eggs that she still laid despite her metamorphosis. 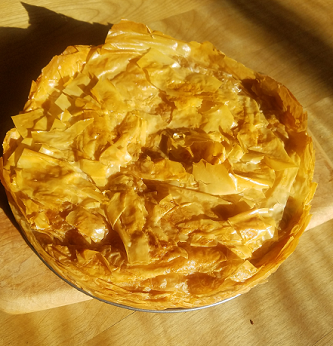 4 thoughts on “Parsley and Pine Nuts”