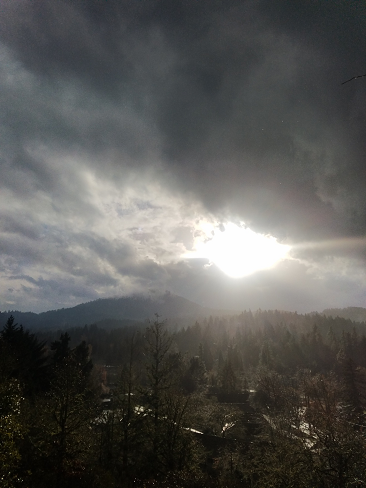 The winter rains finally arrived on Thanksgiving with the full moon. Rain slanted sideways blowing in sheets, gusts bowed the trees and swung the long metal chords of the wind chimes to smash against the southern plate window. This is the hard cold rain that smells of snow, the hard gray sky indistinguishable from the black streaming streets, dark shadows of fir standing sentry. The sun’s gone south. The moon is waning.

American Thanksgiving is observed on the fourth Thursday in November. In English, Thursday derives from “Thor’s Day,” the day of thunder in German and Old English, Jupiter (or Jove’s) day in Latin, with ancient Greeks naming it hemera Dios, the day of Zeus. (The Hindi name for Thursday is Guruwar, which might be related to the god Vishnu, but I will withhold further presumption as I actually don’t have a clue.)

The Thanksgiving morning newspaper was slight compared to the newsprint that arrived inside: flyers and inserts advertising Black Friday sales and stores that would open at 2 PM.

The Dallas Cowboys always play a football game on Thanksgiving. Their symbol is a star.  I was there on Thanksgiving once, in Cowboy stadium (now renamed AT&T) to watch the Cowboys play the Seattle Seahawks, the closest thing I have to a home pro-football team.

When I walked Dad’s dog, Ben, Saturday-after-Thanksgiving through the affluent yet middle-class streets I grew up in, women strode through their yards inflating Christmas figures arranged on the front lawns, frowning as they hung strings of lights in shrubs. Men balanced on ladders and cursed enthusiastically. Ben growled at the life-size effigies of Swiss Mountain dogs in Santa hats as we passed. I wondered if the giant Frosty the Snowman figure would be exhausted and deflated by solstice. Thanksgiving came early this year.

I watched a flock of wild turkeys spar as they pecked at windfall apples in the road.

It’s dark when I get up. This morning it was too early, too dark. Mercy squeezes under the bed to sleep. She sings like a whale sometimes when she wants me to get up; perhaps this morning she was merely dreaming. She stole my flannel robe from the foot of the bed and I had to parley a bit of chicken jerky for its safe return.

The kitchen lights above the stove warm a sheltered circle. I catch slivers of my reflection in the window as I give the dog her breakfast and drink my juice. The tea kettle I’d cleaned before Sunday’s dinner party is splattered again with last night’s sauteing. It is the kettle, I think, the kettle I miss most before I leave.