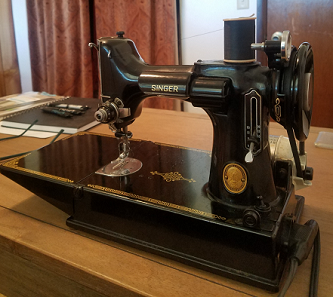 Clear the writing table of paper, books, and pens, the bits of candle and boxes of watercolor pencils; the kitchen’s trestle table is cluttered with the season’s last tomatoes spread to ripen, the final few summer squash, and turkey quills–there is no room for mending upstairs.

Do others still mend the straining seam or torn placket? Or do they simply fold the flawed clothing and stack it in a paper bag to donate or discard in the trash? Once it was expensive to purchase clothing, when Levi’s jeans were still sewn in San Francisco and the going wage was $2.30 per hour for scooping ice cream at the 31 flavors. There was no internet or Amazon, of course, offering instant comparison pricing and stinging reviews. There were department stores downtown, and more being built at the malls, or the Sears catalog to buy clothing. There were fabric stores as large as a warehouse with rainbow shelves of thread and offering charming selections of notions displayed on sprawling racks.

It was my grandmother’s sewing machine, a portable Singer stowed in a thick black case. Its features include the ability to sew both forward and backward. When Grandma died, my eldest cousin Kathy claimed the sewing machine, despite owning a deluxe zig-zag cabinet model Singer of her own.  But Mom said “No,” and had the machine fitted with a new motor. She gave it to me. I’ve carried it across the country and back, through many household moves, and now she rests in a black lacquered cupboard of her own.

To my mother’s eternal frustration and consternation, I refused to thumb through the pattern catalogs in the fabric store and select a Butterick pattern for a sewing project. I had designs of my own.

I found a lovely book about patternless sewing in the school library. I stole it. (Delighted to report that this same book is still apparently in print: Son of Hassle-Free Sewing: Further Adventures in Homemade Clothes by the authors of The Illustrated Hassle-Free Make Your Own Clothes Book, available on Amazon, of course.) I laid out printed cotton tapestries imported from India and fashioned long dashing coat-dresses  with high smocked sleeves and fastened with a matching cummerbund. I bought remnants fabric ends and devised patchwork tiered skirts and vests of puckered patches.

As time went on, I returned the stolen book to the library. I sewed less often, finding it harder to thread the tiny eye of the needle when I did. My last project was a quilted cushion for the firewood box and the results were disappointing somehow. I took up knitting, which is really just tying many interconnecting knots and threading nothing.

When I finally took out my sewing machine to dispatch with mending, I wondered if the little light bulb above the presser foot would still burn, if I would still be able to thread the needle. The hand remembers; the light still burned.

I discovered the silk my grandmother brought me from Hong Kong long ago, still folded next to the machine, all whole liquid blue and silver, never cut. 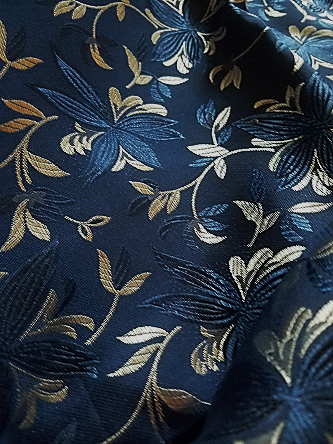 8 thoughts on “Threading the Needle”