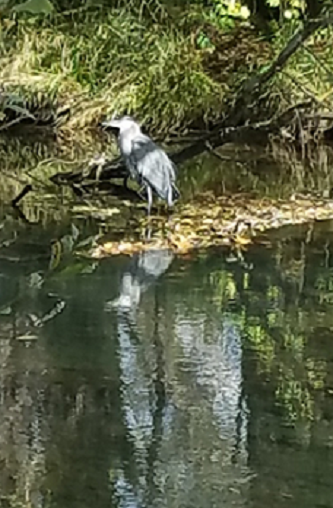 Fog seeps in during the dark morning hours and licks at windows and jambs. It may dissolve by noon, or it may settle and weep for a week. Out of the valley, above, the sky is bitter blue and the sun radiant. Waiting in traffic, playing with the radio.

One or the other, not both. Choose.

At some point the building inspector comes to check the new hot water heater installed yesterday. There’s a sign stapled outside displaying the permit number. The old tank started leaking and a towel laid to soak up the rivlet needed changing twice a day, wringing out one and barricading with another, hanging the wet one out on the deck railing to drip. It’s a hybrid hot water heater with wifi, warming a tank of water via heat rummaged from the air. It looks like the robot from Lost in Space.

D. managed the replacement, as with all the structural and engineering things that go wrong in a household because he’s a wizard, moving my plastic bins packed full of salvaged wrapping paper and Christmas ornaments from the garage shelves to run the condensate line along the wall to drain outside, and then stacking them carefully back. Before the young men came to install the new heater, I took a long hot shower and combed through my hair with my fingers to shed any honey locust leaves, because civilization is held together with duct tape.

Dancers learn to spot during an extended turn, during a fouetté, a pirouette, to maintain body line and balance without becoming dizzy. A dancer focuses her eyes on a fixed point as she turns, whipping her head around ahead of the turning body to maintain equilibrium.

Pick a farther spot, one in the middle distance, and don’t let go.