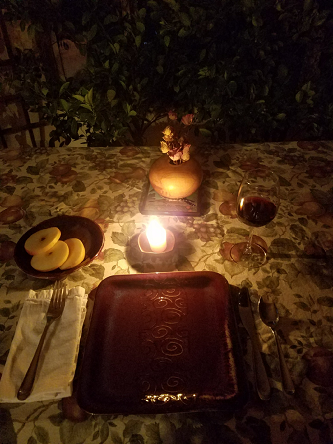 Terry comes on Wednesday mornings. He drives an old gray pickup with a cracked windshield and garden tools lashed in the bed: mower, edger, leaf blower. Terry works for neighbor Vic across the road; he backs his truck into the hammerhead atop our hill and lets down the tailgate to roll out machinery. Mercy races from the front windows downstairs to the back yard yammering and howling, hammering at the back gate until I catch up to let her out to greet Terry and his dog, Aggie.

Hard frost in a moonless night, leaves skitter to drifts, bank against stone.

When Mercy was a pup, we went over to properly introduce ourselves beyond a nod and wave. She’s shy with strangers other than children, flitting and flirting, but determined to avoid strange hands reaching out to pat her square head, fumble at her silver doeskin ears. Mercy took a shine to Terry. She’s not startled by deafening gas-powered machinery now, quite the contrary. While riding in the car, she attends to every stranger out mowing we pass, as if each one might be Terry.

I walked out after Mercy with a bag of Halloween candy for Terry and chicken jerky for Aggie. I don’t know why I buy the candy anymore and stage it on the hallway table close to the front door when no one knocks; the steep hill and dead end road are a bad bargain for costumed children.

My son is grown and on his own, well beyond trick-or-treating–those years I insisted he eat some dinner before we ventured out in various storms to canvas the neighborhood and collect sweet booty in a plastic jack-o’lantern.  He was always the Dark Knight.

Snow above high in the wind, barometer of falling. The Wasp Queen driven out from her nest under fallen timber wanders, seeks shelter before the storm.

I throw a tennis ball for the dogs, throw a stick Mercy stole from the wood crib when the ball is lost, and talk while the wind lifts my hair like Medusa because I’ve forgotten my hat. Terry has a backstage pass for the show at MacDonald Theater tomorrow, he says and asks, what do we plan for Halloween?

Prepare a fine meal, I explain: a lamb chop, an apple cut for the star seeded inside, a glass of red wine, arranged on linen with the blessed dead invited to dine.

Do they come? He asks.