It started to rain yesterday, a slow soaking rain seeping deep to the roots. There were ten days of sun and heat since the middle of April. We were caught unprepared, still in fleece hoodies and heavy socks, sweating and blinking like pale burrowing creatures venturing above ground.

The trees burst and scattered pollen, drunken profligates the lot of them. The air was curtained with gold. When the wind turned, the moon brought rain to soothe and sweeten the saturated air, waxing bright and growing full. This gentle rain, Lady Rain, comes on the eve of May. I suspect magic is afoot.

The lupine leaves spill droplets, rivulets run from the cups of rhododendron blossom, and everywhere the growing green sighs and drinks. Magic is afoot, indeed. 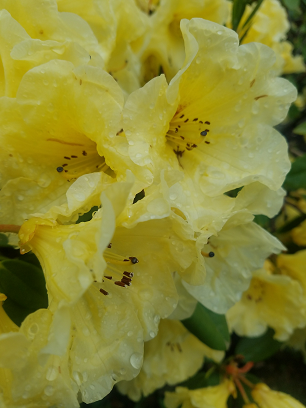 Kim K. McCrea worked as a System Analyst for 25 years building out the internet of things before returning to letters in 2017. Kim won Oregon Writers Colony 2018 essay competition, Treefort Wild West Writing Prize, and was awarded runner-up in Cutbank short prose contest; her work was short-listed for Proximity Magazine's Essay Prize and the Barry Lopez Creative Nonfiction Contest. Prose appears in Cutbank, Tishman Review, Thoughtfuldog, and Watershed Review. Kim lives in Eugene, Oregon, where she wrangles her Labrador in the rain. Unless otherwise credited, all photographs and images on this site are the original work of the author who retains all rights to their use . View all posts by Kim K. McCrea